According to the Warren Commission, Lee Harvey Oswald fired three shots from the sixth floor of the Texas School Book Depository building, killing President John F. Kennedy. The event remains as intriguing today as it did in 1963, and thousands of people visit historic Dealey Plaza every year, hoping to connect with an event that remains seared in the nation’s collective mind.

While there is plenty of room for some to discuss the veracity of the Warren Commission report, here is a checklist of some of the must-see places on a visit to Dallas:

— Dealey Plaza: A National Historic Landmark District since 1993, Dealey Plaza looks as if it’s frozen in time. It’s eerie just how similar this plaza looks to the one seen in photographs taken on Nov. 22, 1963.

Today, tourists, amateur historians and conspiracy theorists alike come to Dealey Plaza in droves. Some pose for a picture on the infamous grassy knoll while others dodge traffic to stand in the exact location, marked by an ‘X’ painted on the asphalt, where a bullet fatally struck Kennedy.

The John Fitzgerald Kennedy Memorial, a simple concrete cenotaph was built in 1970 a short distance from Dealey Plaza. 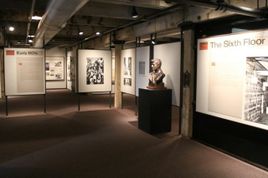 — Sixth Floor Museum at Dealey Plaza (411 Elm St., Dallas): The museum originally opened in 1989 and tells not only the story of Kennedy’s assassination and the aftermath of his death, but puts into context Kennedy’s visit to Dallas, which was in essence one of the first stops of his 1964 re-election campaign.

The most powerful scene in the museum is arguably the reconstructed sniper’s perch. According to the Warren Commission, Oswald organized boxes containing schoolbooks into the perch; the museum based a reconstruction of the perch on historic photographs.

— Ruth Paine House (2515 West 5th St., Irving): The city of Irving is turning the small ranch house where Oswald’s wife was staying in November 1963 into a museum. Oswald spent the night before the assassination at this house. 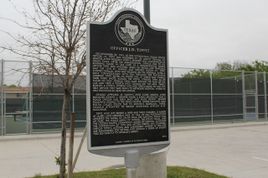 There, he spotted and stopped a man who resembled the description of the suspected presidential assassin walking near the intersection of 10th Street and Patton Avenue. According to investigators, Oswald fatally shot Tippit, and then ran off on foot.

Interestingly, Oswald was arrested for Tippit’s murder, not the assassination of Kennedy.

“He was an ideal officer. He was a man of very fine morals,” Dallas police chief Jesse Curry said at Tippit’s funeral, according to a 1963 Associated Press account. “He was a very quiet and friendly man and all our officers had the highest respect for him.” 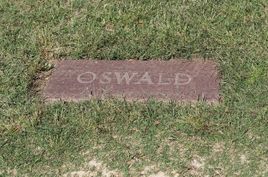 “We are not here to judge, only to commit for burial Lee Harvey Oswald,” the Rev. Louis Saunders said during the service, according to former Associated Press writer Mike Cochran, who attended the ceremony.

Oswald, 24 years old at the time of his death, ended up in Sharon Rose Hill Memorial Park because no other funeral home wanted his body. Within months of Oswald’s burial, thousands of visitors stopped by his grave to catch a glimpse of the final resting place of the alleged presidential assassin.

— JFK Tribute (8th and Main streets, Fort Worth): The night before he was assassinated, Kennedy stayed at the Hotel Texas in downtown Fort Worth. “There are no faint hearts in Fort Worth,” Kennedy told a crowd gathered outside the hotel the next morning, hours before he was killed.

In 2012, the JFK Tribute was unveiled in General Worth Square downtown, near the site of the former Hotel Texas, today a Hilton.

About Todd DeFeo 1340 Articles
Todd DeFeo loves to travel anywhere, anytime, taking pictures and notes. An award-winning reporter, Todd revels in the experience and the fact that every place has a story to tell. He is the owner of The DeFeo Groupe and also edits Express Telegraph and Railfanning.org.
Website Twitter

The Austin Police Department is saying it won’t be responding to non-life threatening 911 calls.