SAVANNAH, Ga. — By the end of 1778, the southern port city of Savannah was in the hands of the British.

In the following months, the British built a number of fortifications around the city, including the Spring Hill redoubt, located near the modern-day intersection of Martin Luther King Jr. Boulevard and Louisville Road.

Starting on Sept. 16, 1779, American troops and their allies started a siege of the city, and Count Charles Henri d’Estaing demanded that the British surrender the city. They didn’t, instead calling on reinforcements from Beaufort, S.C.

The attack needed secrecy to succeed, but according to some accounts, the British had advanced warning. In addition, fog caused troops marching to the battle to become lost in nearby swamps, throwing off the timing of the offensive.

The effort was a failure, and by the end of the battle, which lasted less than an hour, the Americans and their allies suffered 948 casualties — 244 soldiers were killed, including Count Casimir Pulaski, a Polish nobleman often credited as the “founder of the American cavalry.” The British meanwhile suffered 112 casualties — including 60 killed or wounded. 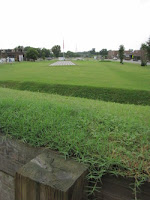 The battle, known as the Siege of Savannah or the Second Battle of Savannah, stands as one of the war’s bloodiest engagements. “I think that this is the greatest event that has happened (in) the whole war,” Sir Henry Clinton, a British officer, later said of the siege.

Following the failed offensive, allied forces retreated from Savannah on Oct. 18, 1779. The city remained under British control until 1782.

In the 1830s, the Central of Georgia Railroad built a roundhouse facility on the battlefield. The railroad owned the property until 2002, when the city purchased the site to create Battlefield Park.

The redoubt that today stands in Battlefield Park is a modern recreation, completed in 2006. The original redoubt stood nearby and is marked by a granite monument.

In addition to the recreated redoubt, Battlefield Park features 800 granite stones, which represent the soldiers who were killed or wounded during the battle.

About Todd DeFeo 811 Articles
Todd DeFeo loves to travel anywhere, anytime, taking pictures and notes. An award-winning reporter, Todd revels in the experience and the fact that every place has a story to tell. He is the owner of The DeFeo Groupe and also edits Express Telegraph and Railfanning.org.
Website Twitter