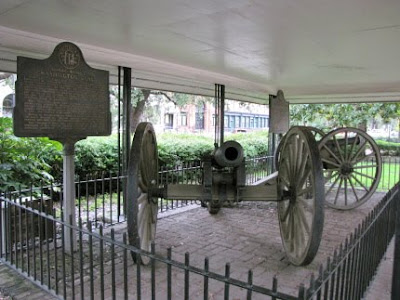 SAVANNAH, Ga. — After George Washington visited the city in 1791, he sent gifts: a pair of bronze six-pounder cannons.

Washington visited the city as part of his so-called “Southern Tour” following his inauguration. “We reached the City where we were received under every demonstration that could be given of joy and respect,” Washington wrote of his visit.

Affectionately called “George” and “Martha” after the nation’s first president and his wife, the guns — one British and one French — were given to the Chatham Artillery, said to be the country’s “second oldest military organization.”

The British cannon dates to 1758 — when George II ruled the country. The royal insignia and motto of the Order of the Garter appear on its barrel, and an inscription on the gun reads: “surrendered by the capitulation of York Town Oct. 19, 1781.”

The French cannon was cast in 1756. This gun’s barrel features Louis XIV’s coat of arms and an inscription in Latin that reads: “Last Argument of Kings.” According to an historical marker placed near the guns, “Louis XIV first ordered (the inscription) placed on French cannon.”

In 1825, there was a push — albeit an unsuccessful one — to send the guns to Augusta. Later, in 1861, the guns were buried and only uncovered in 1872 — after federal troops left, according to one account.