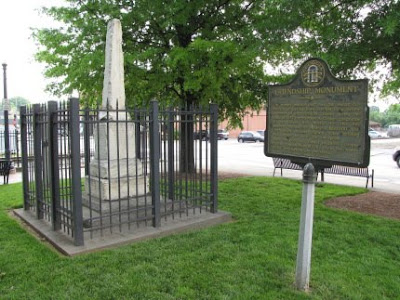 CARTERSVILLE, Ga. – By 1857, Mark Anthony Cooper found himself in debt to the tune of $100,000, and his company, the Etowah Iron and Manufacturing Co., was about to be auctioned.

With the help of 38 friends, Cooper raised $200,000 in notes and purchased back his company. Cooper didn’t forget his friends who helped him raise the money, so in 1860, after he repaid the debt, Cooper built a monument to thank them.

The monument was originally erected on the town square of Etowah, a small town where his iron company was located. In 1864, the monument was the only structure to survive the wrath of Union soldiers led by Gen. William T. Sherman.

In 1999, the monument moved for a final time – to its current location in downtown Cartersville and the aptly renamed Friendship Plaza.

IF YOU GO: Cartersville is located about 45 north of Atlanta. Take Interstate 75 north to Exit 288 and follow the signs to downtown Cartersville.

About Todd DeFeo 811 Articles
Todd DeFeo loves to travel anywhere, anytime, taking pictures and notes. An award-winning reporter, Todd revels in the experience and the fact that every place has a story to tell. He is the owner of The DeFeo Groupe and also edits Express Telegraph and Railfanning.org.
Website Twitter