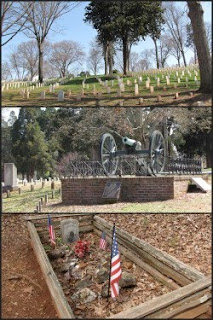 ATLANTA — There are dozens, hundreds, if not thousands, of historical markers dotting Georgia’s countryside, keeping alive the chaos and conflict that once ruled the landscape.

Houses, shopping malls and office buildings stand on land once soaked with the blood of men fighting a brutal conflict that looked for awhile as though it would never end.

There were more than two dozen Civil War battles fought in Georgia. A number of those battle sites — such as Kennesaw Mountain — are well preserved as reminders of the war once waged here. But, many other sites have been lost to modern development.

Residential and commercial development have overtaken Confederate defensive positions where the Battle of Smyrna was fought, a golf course now stands where the Battle of Peachtree Creek took place and the site of Gen. James B. McPherson’s final moments is now in the middle of an intersection in an East Atlanta neighborhood.

Still, there is so much to see in Georgia when it comes to the Civil War. And even if sites aren’t as the same as they were 150 years ago — learning about what happened here and how it shaped the war and the country is just as important.

About Todd DeFeo 1261 Articles
Todd DeFeo loves to travel anywhere, anytime, taking pictures and notes. An award-winning reporter, Todd revels in the experience and the fact that every place has a story to tell. He is the owner of The DeFeo Groupe and also edits Express Telegraph and Railfanning.org.
Website Twitter

The family of Smyrna resident and local historian Leon McElveen has donated a prized model of a Civil War Shoupade fort to the Smyrna History Museum.

According to AAA, gas prices nationwide dropped 2 cents over the last week to $3.907 per gallon, down from $3.929 per gallon a week ago.

Small in stature, ‘smallest church’ not lacking in character

Christ Chapel in Memorial Park is remarkable not for its size, but because of its small stature.